Hayze Perham, who made the move from the Eels in the off-season, will reportedly wear the No.1 jersey in the Canterbury-Bankstown club’s season opener against the Sea Eagles according to the SMH.

Averillo impressed at fullback to close out the 2022 season, but has fallen down the pecking order under the Bulldogs’ new coach.

Watch every game LIVE & ad-break free during play is on FOX LEAGUE with Kayo Sports. New to Kayo? Start your free trial now > 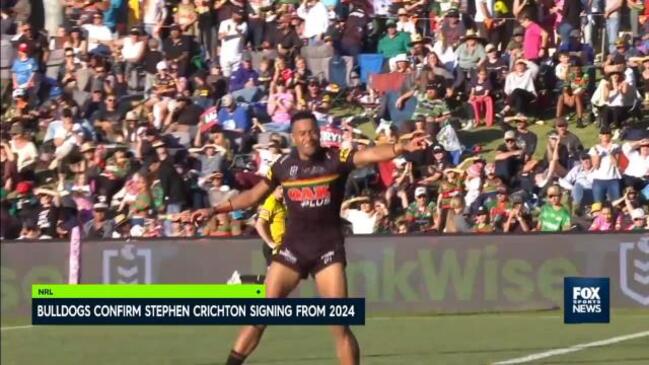 Perham has reportedly impressed the club’s coaching staff since arriving at Belmore and a club official told the Herald he had been training at fullback.

The 23-year-old made his debut for the Warriors in 2019 before spending two seasons with the Eels in 2021 and 2021, making seven appearances of his 16 career games under Brad Arthur.

Perham’s communication at the back is reportedly key to the decision, with Ciraldo focused on minimising the amount of points the Bulldogs concede.

Ciraldo also reportedly believes Perham’s fitness will be important to the Bulldogs season, much like Dylan Edwards’ tireless performances at the back for his former club.

Perham has only played a singular NRL game at fullback, with his utility value seeing him slotting into a variety of different positions.

Ciraldo’s huge selection call will likely see Averillo once again fight for a spot in the centres with young guns Jacob Kiraz and Paul Alamoti.

Meanwhile, Panthers gun Stephen Crichton will also land at Belmore in 2023, meaning Perham has 12 months to impress enough to retain the No.1 jersey.